View all articles by this user
So The Challengers have now played for 13 rounds so far - 8 league games and 2 national trophy matches done on the way. The team is performing far better than I expected, won 7 of the league games and progressed to Round 3 of the national trophy. Our initial goal was to finish in a top 4 position in the league and atleast get to the finals of the league cup, also to go as far as possible in the national trophy. But after 7 league games (7 won in a row), it was clear that winning both the league and the league cup were very realistic targets with the team that we had at our disposal. So I decided to analyze if it was worth getting promoted to division 1, or staying in division 2 was more beneficial to the team in the long run.

The difference in prize money for the league winners and league runner ups was just $2 million. Also the sponsor would give us an extra bonus of roughly $0.7 million. So winning the league would give me an extra $2.7 million in prize money.
Looking at the strengths of teams in division 1, the chances of us staying up in the division 1 was very feeble. So if we were to get promoted, we would receive absolutely no sponsor bonus next season. And even though the other revenues from the sponsor in division could be around 2 times the same that we would get in division 2, the potential sponsor income would be much lower if we got promoted. Not to mention the extra prize money for potentially winning division 2 and the league cup next season. The experience gains for players will indeed be atleast 1.5 times, but that was not a convincing deal compared to the money that would be lost, especially since we are still looking to strengthen the team with transfers where the bank balance could play a vital role in getting in good players.

So after carefully evaluating the pros and cons of promotion, we decided that it was not worth getting promoted unless we can guarantee a 12th place finish. And hence we decided to deliberately lose the next game against the second placed team n the league, and try to finish at second place. As it stands, after 8 league games, we are at second place in the league table with 21 points , 1 point short of the league leaders. 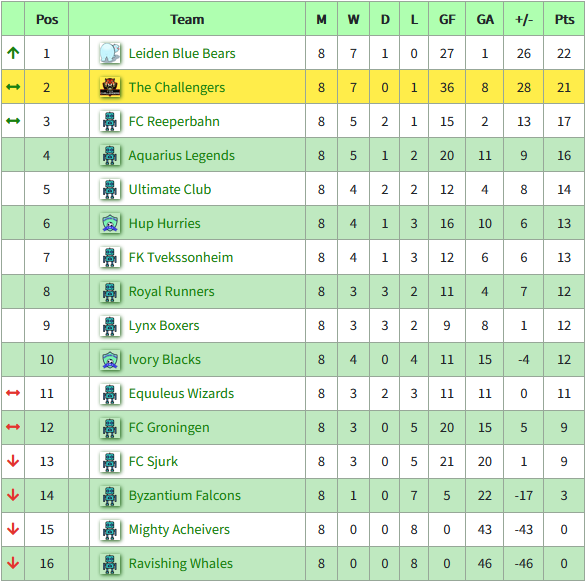 Our coaching efficiency was not ideal with coaches with skills around 90 in all departments and no training centre built yet, but we still managed to get decent improvements to the squad. Our three youth players had +14, +12 and +8 attribute gains, that will improve in future as we try to hire better coaches and upgrade our training centre. So the main focus was to collect as much experience from matches, and as it stands one player is at +3, 6 of them at +2 and a total of 24 experience gains with 23 more custom matches to gain from. With a higher average experience team, we could have gained more but so far happy with how it is going. The target is to gain close to +10 experience for all the 3 youth players, and around +7 for the others. For the time being we are totally neglecting development of our backup players. 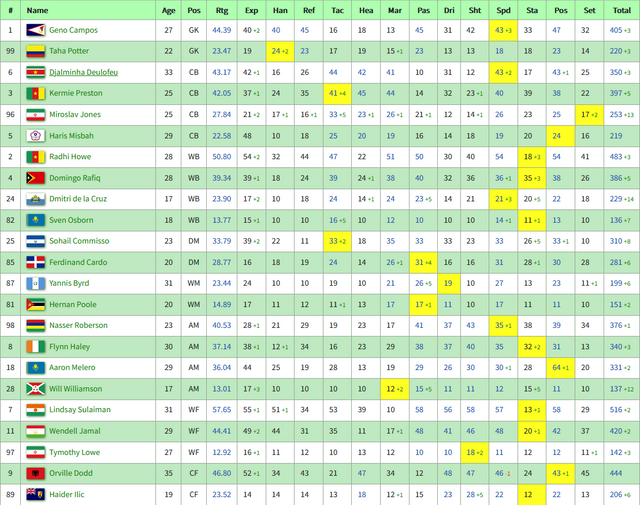 With the small amount of money that we had at our disposal and with a goal to end the season in profit, buying top rated players who could be assets in the future was nearly impossible. So the main focus while identifying transfer targets was to find players who could replace our squad rotation players and also of higher experience that could help our youth players to gain experience faster. So as soon as the transfer ban was lifted in Round 10, we decided to bid for one CB and an AM who we thought would serve well in the long run. And we succeeded in bringing them in. These were the players bought:

Aaron Melero AM 29 years 36 rating 44 experience
A great replacement for Nasser Roberson AM 23 years 40 rating 28 experience who only has a 1.5 star in learning and would be hard to develop fast even though he is very young. It would be better to sell Nasser now and bring in more money since he is young. Aaron also has a high Positioning attribute which will help him perform well in matches, and he has a 5 star rating in leadership, flexibility, right foot and left foot. And most importantly, the higher experience of Aaron will give better experience gains for others in the squad. And with a price of just $22 million (his value was $39 million) he was a bargain of a deal.

Haris Misbah CB 29 years 23 rating 48 experience
We were searching for teamless players with high experience that we could afford, and Haris caught the eye immediately. Miroslav Jones CB 25 years 28 rating 21 experience was the weakest link our squad, and although he was 82 potential and 4 star in learning, we had to offload him in the near future when we strengthen the squad. So we decided that it was probably wiser to sell him when he was still young and since his potential/learning was very attractive. Haris is clearly a better player with his much higher experience (more than double) likely to make up for the difference in rating and helping others with experience gains at the same time. So a $24.5 million price tag didn't deter us from adding him into the squad. We also had the option to loan Miroslav out but given his low rating it is very unlikely that any teams would be interested in him.

So with those players coming in, the squad roles of Nasser and Miroslav will be changed to Backup, with the new players taking up their place as Squad rotation players. 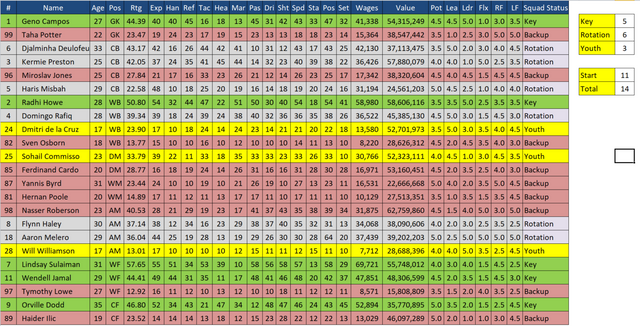 We will also try to bring in 2 players on loan if we get them for super cheap. They will only serve as a backup to increase the squad depth, to cover in case of injuries or suspensions, since we want to make sure that we play friendlies in all 60 rounds of the season. So players with low wages are preferred and quality doesn't matter at all. We do not want to loan in top players since we are likely to win most games with the current squad anyways.

Our financial goal for the season is to end with at least $10 million profit, and we are slightly off track now. We started with $60 million in the bank and the expectation was to finish with $70 million or more. But after splashing some cash in the transfer market, the current projected closing balance is only $50 million. But it is too early in the season, and even one or two extra rounds in the national trophy could change that completely. Also we have two players up for sale, and if those transfers happen that would bring in a great deal of money which we can use to buy more players and still meet the targets.

So that's all about how the team is doing at the moment. Will catch up with another episode towards the end of the season about the final achievements. Keep yourself subscribed to this series!
Last updated by